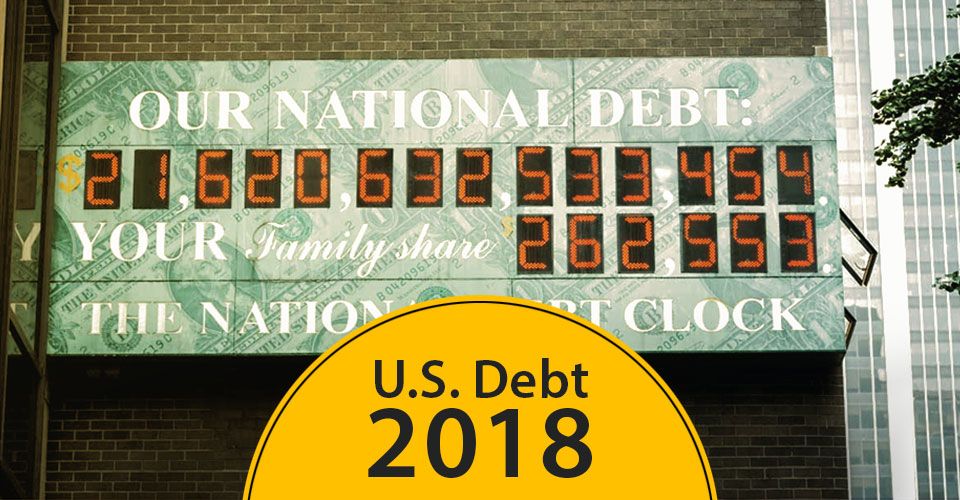 The US national debt is all set to pass the tipping point!

Currently, our nation is the biggest debt carrier in the whole world where the US alone is having a 31.8% share of the global debt!
Our national debt has touched $21 trillion, as of the second quarter of 2018!

Well… it’s bad… very bad… as the economists are seeing it.

The director of national intelligence, Mr. Dan Coats, quotes that the alarming debt amount is a

“Dire threat to our economic and national security.”

If suitable measures are not taken right now, then US debt will reach the death zone where it will become 78% of US GDP (Gross Domestic Product) by the end of 2018, and we can pretty much consider it to be the economic doomsday. Eventually, the CBO (Congressional Budget Office) estimates that total national debt will become 96% of US GDP, by the end of 2028!

As per CBO, the consequences are dangerous for such a huge rise in federal debt. This rise indicates that in the near future we might see a decrease in national savings and income. There could also be an increase in the fiscal crisis, where interest rates on federal debt will rise, and which in turn will impact the cost of government borrowing negatively.

What crisis we are already facing and will face due to the rise in national debt:

As the USA is the biggest borrower right now in the global market, investors have started to deem our country as a risk factor in the recent times.

Guess you remember how Greece lost its investment market after it was hit by the debt crisis of 2007-2008. The same thing can be repeated with the USA. Only because US dollar is the world’s reserve currency, as noted by CBO, and as our nation borrows in dollars, the aftermath of the economic doom might not be as devastating as it was with Greece, Argentina, or Ireland.

But, the issue is, the USA has far more debt than any other country in the world, only followed by Japan, which is at 18.8% sharer of global debt.

If the USA starts to see a drop in its investment field, then as per CBO, our country might become a victim of Crowding Out Effect. That’s when big enterprises and firms would stop investing due to the high rise in the interest rates. Therefore, these investors will look for other investment opportunities, where the USA will invariably be their last option.

A country’s economy is said to flourish when it has the capacity to lend more and borrow less. However, as of the current statistics, America is showing a reversed picture!
Another aspect is also quite important to understand. Because US economy is right now looked down upon, the country’s ability to take suitable financial measures in times of national emergency has been reduced.
As America already owes a lot to other fellow nations, it can become difficult if we are to ask for financial help during times of future natural disasters, financial crisis, or any such unexpected financial attention, from other foreign countries.

The breakdown chart of current US debt ownership:

Above is the chart that explains the total US debt holdings.

How much are we citizens to blame, and what should we do?

Did you take a look at the above chart? Can you see the percentage of debts held by the public?

We citizens and consumers are definitely to blame!

Nearly every day we, at Debt Consolidation Care, are receiving phone calls from different locations throughout the USA, where only what we hear are whimpers and sobbings at the other end! All have debt problems in their lives!

Our financial experts believe that it’s high time, we consumers should start to take preventive measures, else our nation’s debt will keep on rising!

We as consumers can help our country, by first clearing our mortgage debts! Our nation definitely doesn’t want another underwater housing scene, on top of this ongoing debt crisis! Next, we should target to clear the credit card debts. However, if your whole personal debt situation is demanding a definite clear-cut solution, like a do or die phenomenon, then you seriously need to find a suitable debt relief option.

The question is not anymore with us individuals, like how to pay off debts, or how to manage debts, and so. It’s not anymore an individual situation.

Our debts are amounting to the debt ocean that USA is in right now!

To put it the best way, the crisis is now dependent on us!